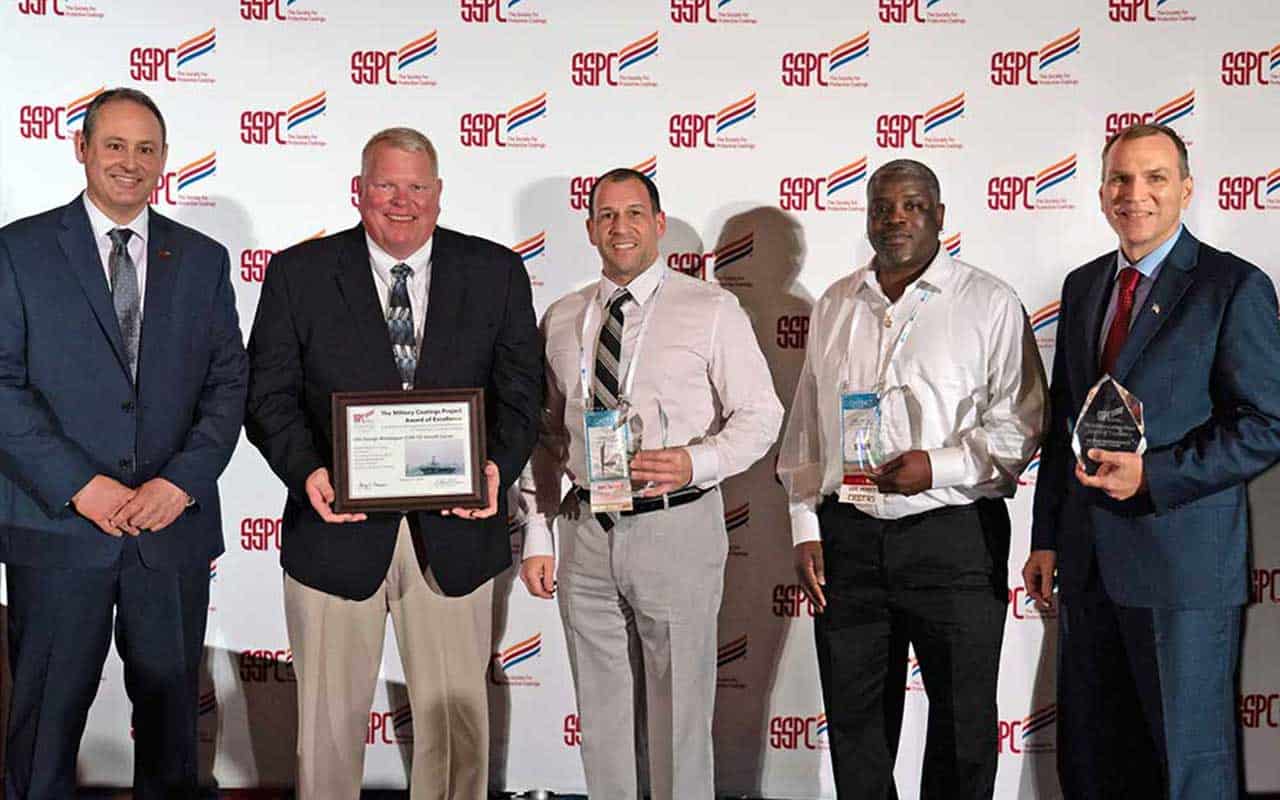 Mid-Atlantic Coatings (MAC) is an environmentally conscious marine blasting and coating contractor that utilizes an innovative approach to surface preparation and preservation.  The company holds the blasting and coating contract for the midlife refueling and complex overhaul (RCOH) of the USS George Washington in progress at Huntington Ingalls Industries Newport News Shipbuilding division. BARTON International (BARTON) supplied over 6,000 tons of garnet used on the project including a new abrasive, 30/60 CG ADIRONDACK garnet.

The aircraft carrier arrived at the Newport News shipyard in August 2017, but project planning started more than two years earlier. Under MAC’s leadership, two teams of equipment representatives and manufacturers were formed — a surface preparation team and a preservation team. “These teams included competitors who worked as partners to assist throughout the planning and execution phases,” said Vincent D’Auge, president of MAC.  “The goal was to work together in the development of new processes as well as enhancements to existing methods with the priority of improved environmental and health safety on the job site.”

A second milestone in surface preparation at the shipyard was the use of garnet for the dry blasting. Traditionally, coal slag was used for repair work. BARTON representatives worked closely with MAC to prove that pure, low dusting BARTON garnet would effectively and safely meet the project requirements.

Engineered specifically to meet the needs of this project, 30/60 CG ADIRONDACK® garnet was first produced in January 2018. “30/60 CG is produced at our mine in the Adirondack Mountains of New York state,” said Randy Rapple, president of BARTON International. “We are honored to have this opportunity to support MAC and the U.S. Navy by supplying our American garnet for the refurbishment of the USS George Washington.”

“The cooperation of all team members was instrumental in the success of the project as recognized by this award,” noted D’Auge. The award was presented at SSPC’s 2019 Coatings+ annual conference in Orlando.

From left to right in the photo are:

Founded in 1994, Mid-Atlantic Coatings, Inc. (MAC) is an environmentally conscious marine blasting and coating contractor serving the U. S. east coast from their Chesapeake, VA headquarters.  With hundreds of skilled employees and a team of SSPC Certified Coating Specialists, MAC is a leader in marine preservation. www.mid-atlanticcoatings.com

SSPC: The Society for Protective Coatings promotes the protection and preservation of concrete, steel, and other industrial and marine structures and surfaces through the use of high-performance protective, marine, and industrial coatings. SSPC is the leading source of training and information on surface preparation, coating selection, coating application, environmental regulations, and health and safety issues that affect the protective coatings industry. www.sspc.org